Rick is a modest guy who is an expert in the art of faux bois. He says he is not an artist but when I see the work he does. I think he is an artist.

Rick hired me to take photographs of his mushrooms as part of his show display. I did some of the photography at his place in Dimondale, Michigan, and brought a bunch of the mushrooms home to use my flowers as backgrounds. He displays his mushrooms at craft shows and offers his benches, chairs & tables via a portfolio. Faux bois when one gets right down to it is rebar steel, steel mesh, and concrete with stains & sealers on the surface. It is very heavy, but a child can slide it with glides on the bottom of the work. He told me one of his benches was purchased & placed outdoors at People's Church in East Lansing, Michigan. I intend to take a walk over there and see if I can take a look.

Give Rick a call at 517-614-0260. I know he would love to show you his work. Along with the mushrooms, I've included a few photographs of the benches a chairs. 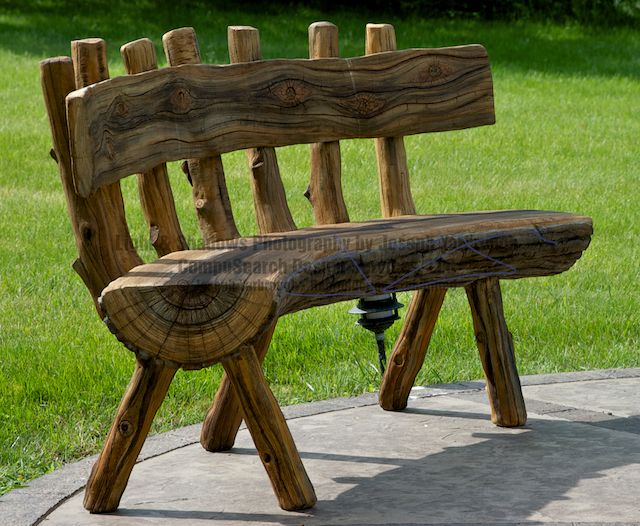 Faux bois (from the French for false wood) refers to the artistic imitation of wood or wood grains in various media. The craft has roots in the Renaissance with trompe-l'œil. It was probably first crafted with concrete using a steel armature by the inventor of ferrocement, Joseph Monier. In 1875, Monier created the first bridge of reinforced concrete at Chazelet, France. It was sculpted to resemble timbers and logs.[1]

Ferrocement faux bois uses a combination of concrete, mortar and grout applied to a steel frame or armature to sculpt life-like representations of wooden objects. Final sculpting can be done while the mixture is wet, in a putty state, or slightly stiff. Techniques vary among artisans. Most popular in the late 19th century through the 1940s, ferrocement faux bois has largely disappeared with the passing of those most expert in its practice. What few objects remain from that peak period (mostly in the form of garden art, such as planters and birdbaths) are now highly prized by collectors.

In Texas, this style is sometimes known as "El Trabajo Rústico" (The Rustic Work). It is often characterized by a more realistic look in both composition and coloring, as well as a more finely detailed finish than comparable European work. One highly regarded artist who worked in this style was Dionicio Rodriguez, a Mexican who relocated to Texas in the early 1920s. Although the man is not widely known, his large-scale faux bois installations have been listed on the National Register of Historic Places.[1] Dionicio's great-nephew is one of the handful of artists still creating Faux Bois today.